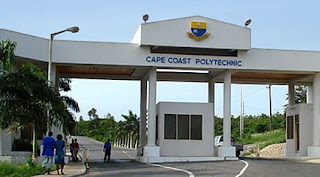 According to the statement signed by the Minister of Education Prof. Nana Jane Opoku Agyemang has revealed that the government has given executive approval  for Cape Coast  and Tamale Polytechnics to be upgraded to technical universities.

Prof. Opoku Agyemang directed the National Council for Tertiary Education to communicate the executive approval to both polytechnics and take necessary steps to ensure a smooth and orderly transfer of all the eight polytechnics that have been upgraded.

Infulfilment of government's pledged to upgrade Polytechnics to degree awarding Technical Institutions, the Technical Universities Act 2016 (Act 922) has been enacted by Parliament.
Earlier when the expert pannel carried out their assessment Cape Coast was not selected due to Governance structure because at the time most of the principal positions except the rector position were occupied in acting capacity. The Ministry of Finance gave a clearance for the institution to employ, hence principal officers have been employed.

Students and staffs of the institution are excited when the heard the news that their school has been upgraded. The students and staffs expressed their gratitude to the Founding Vice Chancellor Prof. Lawrence Atepor and the Governing Council for their leadership style and landmark achievements.

June 20 2016 edition of Central Press we published that "The  Deputy Minister of Education in-charge of Tertiary Hon. Samuel Okudjato Ablakwa  has disclosed that the second assessment report on Cape Coast Polytechnic as technical university is ready and the Minister of Education will make a pronouncement very soon of which Cape Coast will be happy."
It will also be recalled that at a stakeholders’ forum on January 6, 2015, participants unanimously agreed  that the conversion should not be done for all polytechnics at a go, but in phases, based on an assessment of each polytechnic. - See more at: http://citifmonline.com/2016/02/24/6-polytechnics-to-be-converted-to-universities-by-september/#sthash.ivvrFSX2.dpuf
Posted by Central Press Newspaper at 5:33 AM 3 comments: