By: Kwamina Bamfo-Agyei
As part of solving the sanitation challenges in Duakor, Global Host Project in collaboration with some students from Western Michigan University, Sean & Connie Bashaw and Edward Fletcher Foundation have constructed a 10-Seat toilet facility in the area.
Since the establishment of Duakor community in the Cape Coast Metropolis, the community has been lacking public toilet facility.
Global Host Project in April, 2012, identified a catalogue of  various developmental challenges  of the people of Duakor and its adjoining villages, priority among which were poor environmental sanitation,  lack of public toilet facilities, nonexistent of computers in the basic and JHS to sharpen pupils skills in Information and communication technology.
The Country Director of Global Host Project, Kwesi Sampson noted that barely three months after the Project cited Duakor’s needs; the organization donated laptops and set up a Computer centre at the Okyeso catholic Basic and JHS in July 2012.
He said the organization re-affirmed its affiliation with the people and initiated a proposal to provide 10- seat water closet toilets facilities along the Coastal stretch to reduce the incidence of preventable accidents restore their dignity and promote tourism on the beach front. Mr. Sampson appealed to the residents to maintain the facility.
The Executive Director of Global Host Project Nicole Beauchamp expressed her gratitude to all who supported the initiative in realizing the construction of the public toilet. 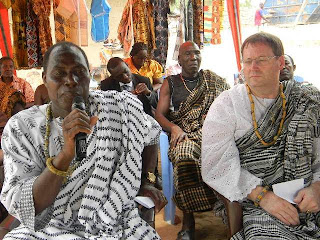 The Chief of Duakor Torgbui Ayix II noted that nobody has constructed a public toilet for them, hence was grateful to Global Host Project and her partners for assisting the community. He latter enstooled Mr. Sean Bashaw as a developmental Chief for the area with is stool name as Torgbui Adika Dzorkpe. 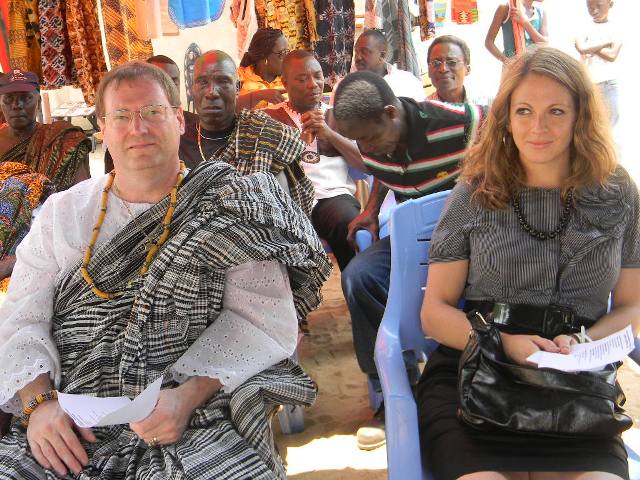